Since we were in Syracuse, my dad decided to drive me by the Onondoga indian reservation where so many of the Iroquois players come from and stop in the arena there just to check it out and look at the lacrosse history!  While we were there, we stopped in the gift shop and turns out Brett Bucktooth was working the shop, who was on the Iroquois team I watched in the Colorado world games, and he was also a Syracuse All American!  So awesome!  It was great meeting and talking to him, and also so much fun to get a taste of the history of lacrosse being near the reservation!

Welcome to the lacrosse nation!!

Roof of a building just off the Onondoga reservation exit… has the Iroquois flag on the roof! So neat!

Side of the area.

Front of the Onondoga arena.

Iroquois flag in front of the arena!

After Lake Placid I headed down to Henderson, NY to spend a couple days at my uncle’s camp right on Lake Ontario.  I absolutely fell in love with this place too because it was like a beach but not!  The water was so clear, the sand was the softest sand I’ve ever felt and the water was shallow for like a quarter mile out!  It was really neat that it was so shallow for so long because you could go out really far and still be able to touch so it was awesome to feel so far out in the water!  Not to mention I was able to kayak a bit and paddle board, both of which I had never done before!  I went out for 20-30 minutes at a time just kayaking or paddle boarding which was fun, especially since the water was so clear and I could see the bottom the whole time!  Also, I took the kayak out one night as the sun was setting which was so awesome because I went out reallllly far and just sat in the kayak for about 5 minutes watching the sun go down!  I’m thinking next summer when I’m done with lacrosse I’ll just pack my bags and live in Henderson for the summer and work at a place on the beach, so then on weekends I can drive up to Lake Placid.  🙂  I’m thinking it’s a great plan!  Anyway, it was a great place to visit and I’m missing it already!

My uncle’s camp! You wouldn’t believe how soft the sand was…

Kayaking into the sunset on Lake Ontario! There were the prettiest sunsets there!

First time paddle boarding! The water was so glassy and perfect at night!

Picture of the shoreline after going on a small hike to the beach.

On the third day in Lake Placid, we headed up to some cliffs after winning our morning game and spent a while there jumping off some crazy cliffs!  At the bottom of the biggest one there, you jumped into some rushing water coming off a small water fall which was so awesome!  Never done anything like that before… such a rush jumping off of it!  After jumping off the big one, I was one and done!!  So much fun though!

Up stream a little bit from the cliffs.

The biggest cliff jump to jump off of there!

On my third day in Lake Placid, we all visited the Olympic ski jump training venue and it was so awesome!!  We walked up to the water ramps first and sat in the bleachers and watched people go off the ramps for about five minutes, and would you believe I instantly spotted Hannah Kearney at the bottom getting suited up to go off the jumps!  I couldn’t believe it!  Then we went up in the elevator to the top of the ski jump and took some pictures of the awesome view and watched a couple people go off the ski jump.  We also met Nick Fairall there who is training for the 2018 Pyeongchang Olympics in South Korea!!  Not to mention he was in the Sochi olympics and got 35th in men’s normal hill… so cool!!!!  Anyway, after getting off the ski lift 3 of us decided to go back to the water ramps and see if Hannah Kearney was still there and she was just leaving as we got there so I was able to get a quick picture with her!!  She was so incredibly nice and I couldn’t help but tell her how inspiring her performance was in Sochi and I wanted to cry during her interview, haha!  She said we made her day.  🙂  So obviously it was an incredibly awesome trip!!  It was crazy that we were there at the same time as her, too, because she said she was just driving through on her way to train in Utah and just stopped by for an hour or two while she was going by!  Such a privilege to meet her and I hope she continues to train for Pyeongchang!

View from the top of the

Water ramps in the ski jump venue…that’s Hannah Kearney in the blue at the bottom of the pool getting ready to train!

Hiked to the summit of Mount Jo on the second day in Lake Placid…  it was a crazy hike!  At some points we had to climb up large rocks like stairs and they were so tall, it was a pretty big incline!  Not to mention we only took one quick break throughout the whole hike!  I think it was about a mile to a mile and a half up the mountain and I was breathing pretty hard in the middle!  It was a really tiring hike but so worth it and so much fun!!

Swimming hole at the bottom of Mount Jo at the start of the hike.

Mount Jo Summit! You can also see the swimming hole at the bottom where we started.

Just a small glimpse of the rocks we had to climb up! Was pretty muddy out too…

Just got done playing a couple games in the Lake Placid tournament and boy was it awesome!!  Lake Placid is probably my new favorite place ever… absolutely love it up there, I didn’t want to leave!!  I had a blast going up there though and getting to play in some games with some great players against some crazy competition!  Unfortunately we lost our first game in the last ten seconds to a great team, but we won our last three games which was awesome!  Really hoping I can go back there sometime again (or maybe even live there someday…)  🙂  Seriously though–mountains, lakes, lacrosse and OLYMPICS!  How could it get better than that?!  (I say that without ever having to experience a winter there though so maybe then I would change my mind!!)

Welcome to Lake Placid…. home to the greatest place on Earth!!

One of the main fields we played on in Lake Placid, but not the main tournament site! Check out that view!

Rink of the1980 Miracle game! The zamboni drops off real snow each morning and it stays there all day!

Today I went on a hike at a local trail and it was my first time there, which I couldn’t believe the whole time because it was such a great trail and such a neat hike!  It is a nice scenic trail with an overlook of a river almost the whole time.  The trail was 3 miles long, but about halfway in my sister and I found two trees that were perfectly close enough to where we could hang our hammock and chill out for a while which was so awesome–never hammocked before but I’m a fan now!!!  Anyway, we just layed around for about 20 minutes and then turned around.  It was a good uphill climb on the way there and the way back was the easy part… pretty much all downhill!  We were out there for maybe almost 2 hours for a 3 mile hike, haha!  We were going pretty slow and just enjoying our time there!  (plus my sister is a bit narpy… 🙂 )

Just got back from being in Denver, CO for the world lacrosse games!  I had an awesome time there watching some of the games.  I even got a chance to meet the Thompson brothers and take a picture with them too!  While we were in Colorado, we went to the stadium two different days and saw Iroquois vs. Japan, a bit of Germany vs. Hong Kong, Team USA vs. Japan, and we were going to stay for Iroquois vs. Canada until there was a rain delay.  😦  The weather there made going to some of the night games pretty inconvenient, but it was still fun to be there!  During a rain delay on the first day we were there, we were stuck under a tent near team Poland, and it was very cool to listen to one of the players talk about the team and how it was an honor to play on Poland for his family and his grandparents, who were born in Poland!  He said 16 players were from Poland, 4 had dual citizenship and 3 were American like he was, or something like that, but had Polish family members.  (I could be slightly off with those numbers but that’s what I remember him saying!)  Anyway, it was a lot of fun to be there to see the best of the best playing in person.  The Thompson brothers are just so darn creative it’s unbelievable to watch!!  Here are some pictures from the weekend!  I used to have pictures of teams on the field, but I guess I accidentally deleted them.

Sporting the USA shorts before getting to see a Team USA game!  (And some Chacos!)  This was during Germany vs. Hong Kong. 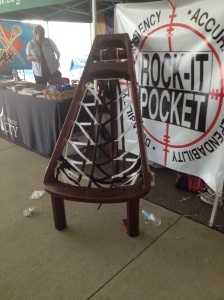 Wishing I had this chair in my house!

So today my friend and I looked up hikes in Colorado and the best sounding one that was close to us was Chimney Gulch Trail so we decided to give it a try.  We hiked it for about an hour and then ended up back at the beginning, and it was a pretty big hill at the finish!  It was a very cool hike and I loved it but unfortunately we think we took the wrong trail because there was another one that went higher up in the mountain that had a better view at the top, but that’s ok because it was still great to hike on a Colorado trail!  We walked by an old mine shaft in the middle of it which was pretty cool to see.  (Unfortunately I wasn’t smart and forgot to take a picture of the view)

After hiking we went to a lake and ran around it quick which was about 1.2 miles or so, and we ran it in about 9:30.  It was a neat flat little loop around the lake, but my legs were still so tired after red rocks and also standing around the previous day watching lacrosse games all day!

CAMP WAS AWESOME.  Working lacrosse camps=best part of my summer!  While I was there, I ran on the first day before all the campers got there with someone who just graduated and was a track and field athlete in college so that was a really good 3 mile run with a pretty fast pace, which I was glad to get in before camp started and also be pushed a little bit in my runs!  Then we ran yesterday as well for an easier 2 mile just to stay on our feet.  Other than that, every other part of my day was spent doing the camp and it was great!!